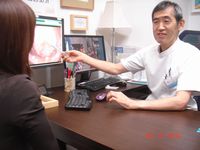 Interview, consultation and, a description of the post-test, takes place in the examination room of the photo. The proctology room will be located next door

Posture should be oriented mainly to the left side, especially for women, so that only the affected area can be seen so that the buttocks are not exposed. Before you use the machine, gently palpate it to see how much pain and tension you have. You also have a rectal examination, and an important examination to see if there is bleeding, tumor, or tumor in the rectum. The anoscope will be a cylindrical one with as little pain as possible at the first visit, and if appropriate, I may also explain it by looking at the anoscope image in real-time.

In particular, the symptoms of hemorrhoid escape may not be recognized at the time of examination at the hospital, and symptoms may appear outside the hospital, such as at home, or only after delivery. In that case, only images were taken by yourself, such as with a camera-equipped mobile phone, will serve as important information for medical examinations (actually, even if you do not give instructions from here, the patient will be able to do so and select treatment). (In some cases, it has a great influence).

Not limited to hemorrhoid, If a problem appears important symptom if it is possible to bring the information of the image, very co- borrows. ( PS: Some proctologists are starting to complain about this importance and are being enthusiastically taught in local newspapers: Dr. Masatoshi Sasaguchi, Seishinkai Yoshida Hospital)（It may not be as important as you might think. In most cases, it is possible to get a diagnosis with a single medical examination, and to talk about the medical condition (please see the image if you wish), and to be relieved from worry.

Warts and hemorrhoids treatment and surgery

In Japan, the treatment has started to be taken up in the media from around 2013, but since 2005, ALTA ( aluminum hydrate tannate )  : Zion®  is covered by insurance, and nearly 600,000 people have already received treatment. Also, data such as side effects are maintained and considered safe. Compared with the conventional ligation and resection, which is a surgical operation, it is less burdensome on the body and there is almost no pain or bleeding during defecation after surgery. You can also rest assured that there will be no sequelae due to scarring associated with the incision. No need for hospitalization, local anesthesia is possible (younger people recommend sacral epidural anesthesia in consideration of intraoperative tension), but you can return to work two days after surgery. The cost is 18,000 yen- 27,000 yen including the preoperative examination for health insurance.

Combined use of dione and ligation resection

Since Dion is not generally indicated for the hemorrhoids on the outer side, conventional ligation and resection are used together, but there are many voices with strong postoperative pain. Therefore, we have succeeded in reducing the pain during defecation after surgery by performing a small incision on the external hemorrhoid to remove hemorrhoid.

Although it is a standard surgical procedure in the world, it is characterized by its high creativeness, although the pain during defecation after surgery is not light and there is a considerable risk of bleeding. The average time to go to work is around 5-8 days. ¥ 23,000-¥ 27,000

Separation and ligation started in November 2018. Since it cures without cutting, it reduces pain and reduces the risk of bleeding compared to excision.

Some people may be surprised by bleeding or pain during defecation, but those who can come up with symptoms soon tend to have acute fissures, and the pain is relatively strong. , I think that there are many people who have a good course if they correct constipation, which causes reassurance, and highly simulative meals if they are corrected by guidance.

However, it can be difficult to treat if you have anal stenosis, if the ointment treatment does not work, or if you have had symptoms for several years but have been left as they are. In such cases, it is subject to surgery. Since surgery is caused by bowel habits such as constipation and diarrhea, recurrence may occur even after surgery, and the surgery may become complicated after considerable stenosis has progressed, so early consultation and treatment are recommended. .. After the actual surgery, it is not possible to hide the appearance of having escaped from pain after returning to comfortable bowel movements for the first time in a while.

We will utilize the digital anoscope even during surgery, provide images if desired, and proceed with surgery after consent.

At the same time as the medical examination, fungi and bacteria are inspected, and appropriate treatment such as ointment is selected in consideration of the patient’s situation and the patient is followed up. During that time, changes in skin findings are important, so record an image and observe the changes. There are many unexplained causes, and it is not possible to get a clear solution with a single medical examination. Based on the above, we will proceed with medical treatment while talking to each other and proceed to the solution.